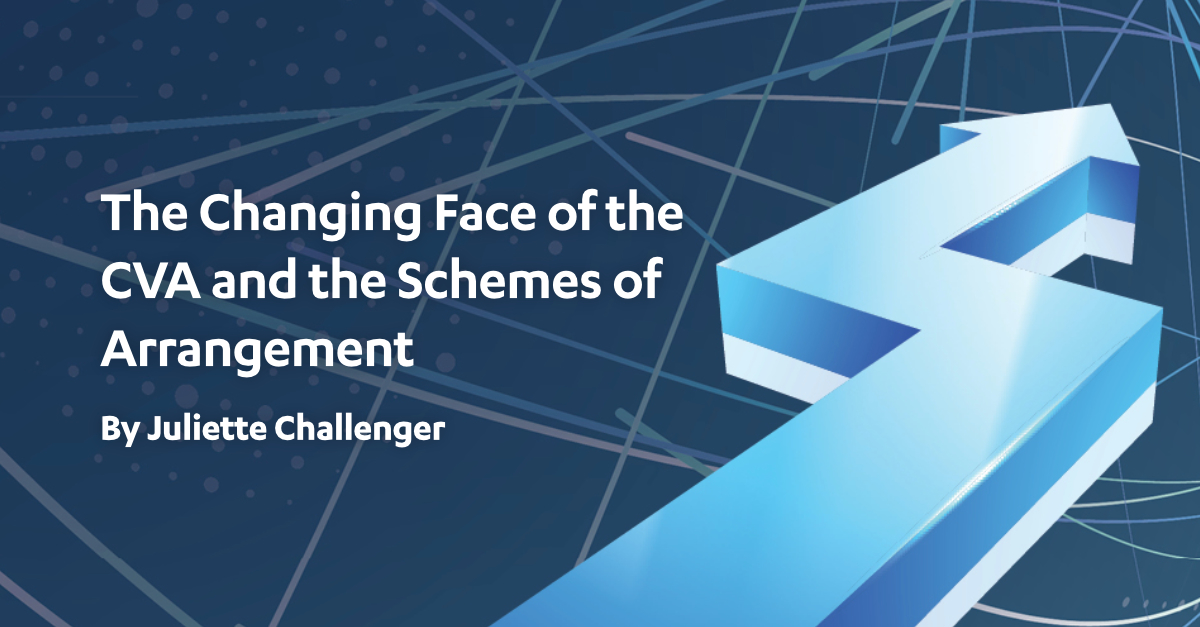 The use of company voluntary arrangements and court sanctioned schemes of arrangement as tools to restructure the debts of a company in financial difficulties has continued to increase in popularity in recent times, particularly in the retail sector, as an alternative to formal insolvency procedures, with the aim of generating better financial outcomes for the company in question and its creditors.

However, there have been some interesting developments in recent case law that have clarified the parameters around such arrangements, specifically the recent judgments in the Debenhams and Instant Cash cases, which may have a significant impact on the future content and structure of such restructuring mechanisms.

As an experienced independent debt administration services provider, GLAS has been involved in various capacities in numerous restructuring transactions and processes, including CVAs and Schemes, as an active participant in the restructuring of the company’s financial arrangements, resulting, in some cases, in litigation, including in the Debenhams case. The recent legal developments raise key considerations for security agents collaborating with transaction parties to analyse and assist with achieving the goals of the transaction parties aiming to enable companies to continue as a viable going concern outside of a formal insolvency process.

What is a CVA?

A company voluntary arrangement (“CVA”) is a tool permitted under Part 1 of the Insolvency Act 1986 and is essentially a contract between a company in financial difficulty and certain of its creditors, which enables a company to restructure and compromise its debts and liabilities, with the aim of generating a better financial return and better prospects for the business than if the company entered into a formal insolvency procedure, such as liquidation.

Unlike other insolvency procedures available, the directors of the company remain in control of the business, which continues to operate under the supervision of an insolvency practitioner, and under the terms of the arrangements agreed between certain of the company’s creditors.

There has been a recent increase in the use of CVAs, particularly in the retail sector, as the CVA can offer a mechanism for the company to restructure its rent obligations with landlords as a whole class of creditor, without the need to negotiate with each landlord individually, and has the potential to swiftly and significantly reduce rental outgoings of a company. Additionally, a CVA typically allows greater flexibility than a formal insolvency process, and is often more cost effective to implement, therefore offering a more commercially attractive outcome.

Discovery (Northampton) Ltd v Debenhams Retail Limited [2019] EWHC 2441 (the “Debenhams case”) was a recent significant case relating to CVAs, in which GLAS had direct involvement due to its role on the wider transaction.

Given its expertise in complex restructuring matters, GLAS was mandated as successor Facility Agent and successor Security Agent in March 2019 in respect of the existing loans and notes of Debenhams Retail Limited (the “Company”) and other Debenhams group companies (the “Group Companies”), in addition to a subsequent new money facility and transfer of debt obligations of some Group Companies to a new funding vehicle (the “Restructured Facilities”). This appointment involved representing financial creditors whose total exposure to Group Companies was in excess of £700,000,000, providing administrative services in respect of the Restructured Facilities and taking a pragmatic approach to facilitating communications amongst lenders in respect of the proposed CVA arrangements.

Summary of the CVA proposals

Following consideration of its financial position and existing debt arrangements, the Company’s directors had proposed a CVA in May 2019 mainly to compromise unsustainable retail rental and business rate liabilities. The proposals principally affected the Company’s landlords and local authorities, and the proposals were approved by over 90% of the Company’s creditors.

Despite this overwhelming approval, a minority group of landlords (the “Applicants”) initiated a challenge to the CVA proposals on several grounds, including specifically relating to the proposals that would impact landlords and the treatment of rental payments due under existing lease arrangements.

At a hearing in September 2019 (the “September Hearing”), the main claims asserted by the Applicants (in bold type), and the court’s findings (in italics) , were as follows:

Therefore, this last point highlights the one important ground on which the Applicants were successful in relation to the forfeiture of leases – i.e. a landlord’s right to terminate a lease before its stated termination date due to a breach of the lease terms by the tenant, allowing the landlord to re-enter the property.

Norris J therefore determined that the CVA was still valid and remained enforceable, but would be subject to certain amendments/ deletions to sever the proposed forfeiture provisions from the remaining proposals in the CVA.

Norris J confirmed the findings in the September Hearing regarding the severance of the forfeiture provisions, upholding the decision that the CVA was valid and could proceed, albeit that the proposed forfeiture arrangements would need to be deleted from the CVA, as it is not possible to interfere with the forfeiture rights of landlords.

The judge also dismissed an application by certain of the landlord Applicants pursuant to the Insolvency Rules in connection with a request for the court to review the order made at the September Hearing in light of arguments on certain points of law that were not advanced by the relevant parties at the September Hearing, and made determinations as to costs.

However, leave to appeal the judge’s decision of all matters raised at this hearing was granted, potentially leaving the door open for further future challenges by the parties on these points.

The Security Agent’s role in litigation

Shortly after the September Hearing, an analogous decision to that of Norris J’s in the Debenhams case was handed down by Zacaroli J in October 2019 in In the matter of Instant Cash Loans Ltd [2019] EWHC 2795 (the “Instant Cash” case).

The Instant Cash case related to a scheme of arrangement under Part 26 of the Companies Act 2006, being a court sanctioned arrangement between a company (the “Scheme Company”) and its creditors to achieve a compromise of the Scheme Company’s existing debts (a “Scheme”).

The court in this case had to determine whether the proposed Scheme, which amongst other things, purported to effect a surrender of leases between the Scheme Company and its creditors with the effect of replacing the liability to pay rent with a claim for damages by the relevant landlord, was valid.

The court determined that the provisions purporting to unilaterally and automatically terminate the lease arrangements between the Scheme Company and its landlords by surrender by the tenant was void, as this interfered with the proprietary rights of the landlord, and did not relate to a contractual right between the Scheme Company creditor and a debtor. The court made the distinction, as in the Debenhams case, that the Scheme can only deal with rights between a debtor and a creditor, not with proprietary rights, such as those arising from lease arrangements between a company and its landlord.

The court also found that a lease cannot be terminated by the will of the tenant alone, and that the surrender of the lease in this case was considered to be an unnecessary additional consideration, as it was ancillary to the compromise of a pecuniary liability, and not necessary to ensure the effectiveness of the compromise of debt effected by the Scheme. As such, the court found the surrender provisions in the proposed Scheme were out of the scope and jurisdiction of the court under a scheme of arrangement pursuant to the relevant provisions of the Companies Act 2006.

Therefore, the court determined that it could sanction the proposed Scheme, provided that the lease surrender provisions were removed. The approach of the courts in this case shares significant similarities with the decision in the Debenhams case, that whilst it is possible to vary contractual provisions as between a debtor and creditor, it is not possible to unilaterally interfere with the proprietary rights of a landlord.

A new way forward for CVAs and schemes of arrangement?

The Debenhams and Instant Cash litigation produced two judgments in quick succession on different restructuring procedures where the court has sought to clarify and confirm aspects of the law in respect of creditors’ (and specifically landlords’) rights. These decisions may well have far reaching consequences for the scope and content of future CVAs and Schemes, given the potential implications on the ability of creditors to dictate or determine arrangements in respect of forfeiture or surrender of leases, which is often a key consideration for the creditor group in the decision to implement a debt restructuring using these methods.
Given the role played by the Security Agent on behalf of the secured parties in these transactions, it will be essential to continue to follow these developments in order to be ready to anticipate future challenges or issues arising where CVAs or Schemes are contemplated.

On 9 April 2020, the directors of Debenhams appointed FRP Advisory as administrators over Debenhams Retail Limited and Debenhams Properties Limited with the aim of protecting the UK businesses from creditors, and potential liquidation, due to the current COVID-19 pandemic.

Article Name
The Changing Face of the CVA and Schemes of Arrangement
Description
The use of company voluntary arrangements and court sanctioned schemes of arrangement as tools to restructure the debts of a company in financial difficulties has continued to increase in popularity in recent times, particularly in the retail sector, as an alternative to formal insolvency procedures, with the aim of generating better financial outcomes for the company in question and its creditors.
Author
Juliette Challenger, Deputy General Counsel, GLAS
Publisher Name
GLAS
Publisher Logo

Article Name
The Changing Face of the CVA and Schemes of Arrangement
Description
The use of company voluntary arrangements and court sanctioned schemes of arrangement as tools to restructure the debts of a company in financial difficulties has continued to increase in popularity in recent times, particularly in the retail sector, as an alternative to formal insolvency procedures, with the aim of generating better financial outcomes for the company in question and its creditors.
Author
Juliette Challenger, Deputy General Counsel, GLAS
Publisher Name
GLAS
Publisher Logo