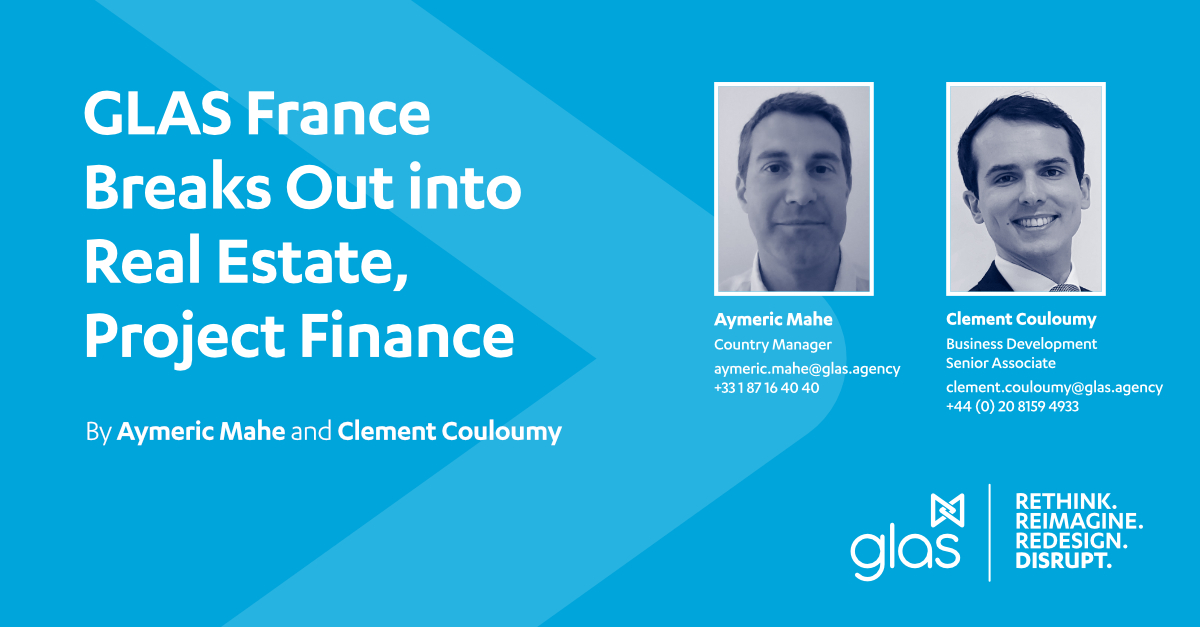 By Aymeric Mahe and Clement Couloumy

Over the last two years, we have seen tremendous evolution in the French debt markets primarily driven by the emergence of private debt funds. These players, who came to prominence in the U.S. and U.K. nearly a decade ago but developed more slowly in continental Europe, now drive notable volumes of deal activity in France.

Along this same time frame, we formed our team here in France in the winter of 2018. Our growth here has followed a similar course to French debt markets: initially focused on the servicing of direct lending in support of private equity M&A, the GLAS team now regularly wins mandates to manage complex syndicates. As the only regulated independent agent in the French market, we provide one-stop-shop services to clients with the security and backing of our regulatory license.

In that same span, our team has nearly tripled in size to 20 experienced professionals—and for good reason. Last year, GLAS SAS experienced nearly tripled the number of transactions serviced from 2020. Importantly, while volume increased, we also received mandates on a broad array of transactions including complex syndicated facilities in the real estate and project finance markets.

Real estate funds raised more than $152 billion in 2021, an increase of 6% from the year prior. With the expansion of private capital across asset classes, real estate debt investment has become increasingly popular in France. Despite the increase, this is a relatively recent development in continental Europe, where traditional financial institutions typically dominated the lending market.

However, unlike direct lending which tends to be more simplistic, the debt financing around real estate transactions can be particularly complex. The sector involves documentations with many local market specificities and an emphasis on reporting and monitoring, often associated with the construction phases. GLAS’ transaction managers provide a level of proactivity above and beyond to ensure smooth completion of real estate transactions.

As global marketplaces cope with rising inflation and other macroeconomic factors, we anticipate real estate capital allocations will increase and debt financing deals to continue to grow. Our experienced team is poised to service the rising prevalence of real estate transactions expected in 2022 and beyond.

In October 2021, GLAS served as agent for French Guiana hydrogen technology project CEOG, which raised debt financing from seven different banks in preparation for a 25-year operation phase. The complexity in this deal associated with multiple sources of capital and the long-term operation of the project discouraged traditional banks from taking on the agent role. As situations like these become more prevalent, independent agents like GLAS are taking over—and rounding out experience in the sector.

Our growth in the French market has also been fuelled by our unique position as the only independent agent regulated by the ACPR (Bank of France). Our ACPR licence allows us to execute fund flows, perform payments and offer pre-funding and escrow solutions all around Europe to accommodate the most complex transactions.

As alternative lenders, banks and sponsors look to minimize risk in their transactions and partner with a regulated agent, GLAS is proud to provide a trusted alternative.

To learn more about our services in France, please reach out to Aymeric (aymeric.mahe@glas.agency) or Clement (clement.couloumy@glas.agency).