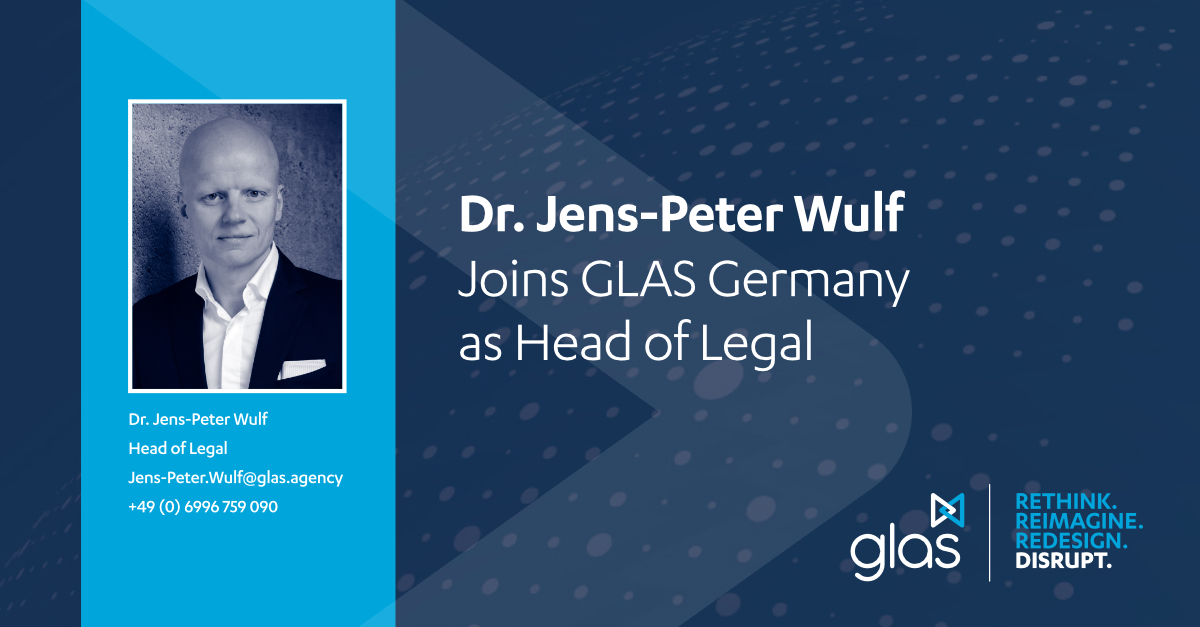 FRANKFURT, 1 December 2022 — GLAS today announced that Dr. Jens-Peter Wulf has joined the firm as the Head of Legal for GLAS Germany based out of its Frankfurt office and reporting to the Head of EMEA, Joanne Brooks. He brings years of legal experience in alternative assets and banking, working to ensure his firms remain in compliance with the financial services industry’s complex regulations in Germany, across Europe and further afield.

Wulf joins GLAS from XTP AG, a financial services consulting company for institutional investors that assesses the costs and efficiency of investment allocations and their implementation structures, where he served as the firm’s General Counsel. Prior to this role, Wulf was Head of Legal & Compliance for EMEA at Avaloq, a Swiss banking software, IT and back-office outsourcing company, where he built a Germany-based legal and compliance team from the ground up.

“Our growing team in Frankfurt plays a vital role in servicing our European clients,” said Joanne Brooks, Head of EMEA at GLAS. “In the nearly two years since we opened our Frankfurt office, our team has grown significantly and we’ve expanded our portfolio of transactions. I’m eager to work with Jens-Peter as he leverages his experience building legal teams to help us grow our book of business in this important market while ensuring full compliance and excellent client service.”

GLAS Germany operates in a complex regulatory environment that requires on-the-ground legal expertise.  The company holds a Payment Service License/PSD2 and a Collection License (a legal requirement under German law), which enables GLAS to facilitate transactions for clients in the German market. In his position, Wulf will be responsible for maintaining the business’s regulatory status and holding this license. He will also advise both the Frankfurt-based transaction management team and the broader European transaction management teams on their deal work as it intersects with German issuers, lenders and jurisdictions.

“I’m excited to help support the GLAS business model in the German market and build out the legal team in Frankfurt,” said Wulf. “GLAS approaches transactions with a refreshingly entrepreneurial mindset that I hope to complement with my legal acumen. I look forward to working with Joanne and the broader team to capitalize on what should be an active period in the German middle market.”

Global Loan Agency Services Limited was established in 2011 as an independent provider of institutional debt administration services. The company was originally created to provide the market a willing participant in complex loan restructuring transactions where many large institutions are reluctant to take swift and cooperative action. It offers a wide range of administration services developed specifically for the debt market. GLAS is recognised as the premier independent, non-creditor, conflict-free provider of loan agency and bond trustee services, with excess of EUR 200bn of assets under administration on a daily basis. For more information, please contact media@glas.agency.